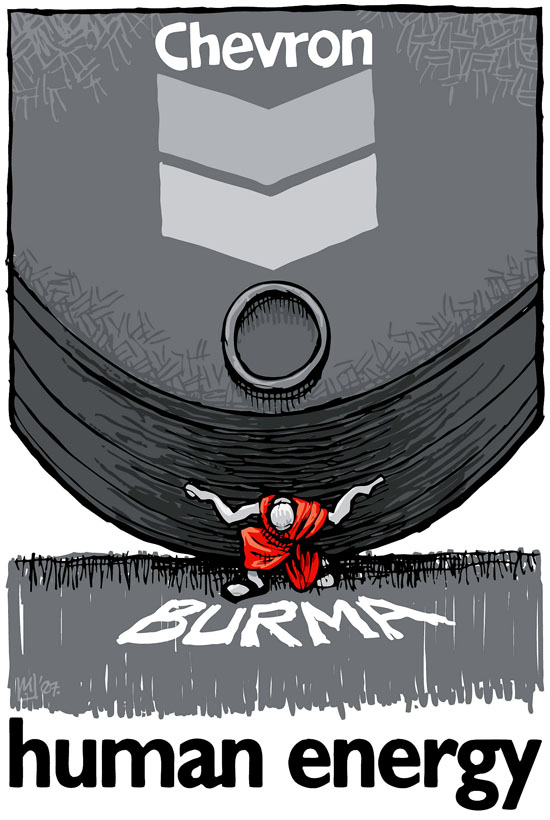 Boycott Chevron until it stops supporting the Myanmar military.

As Myanmar’s generals look for revenues to prop up their new dictatorship following the February 1 coup, there’s one source of money they can count on: natural gas projects backed by foreign investors including France’s Total and Chevron of the US, South Korea’s Posco and Malaysia’s Petronas.

Myanmar earns close to US$1 billion a year from natural gas sales.

Much of this money is not paid directly from oil companies to the government. It flows through Myanma Oil and Gas Enterprise (MOGE), a state-owned enterprise with deep links to the military’s business empire. Alarmingly, the recent military coup places MOGE and the rest of the government under direct military control.

Chevron is the largest U.S. corporate investor in Burma (Myanmar). In partnership with Total of France and the Burmese government-owned Myanma Oil and Gas Enterprise (MOGE), Chevron owns the Yadana gas field and pipeline that generates billions of dollars for the Burmese government. In March 2015, Chevron entered into an additional production sharing contract with MOGE to explore in the Rakhine Basin off the coast of Rakhine State.

No Business With Genocide joins Justice For Myanmar in calling for all businesses with commercial ties to MOGE to immediately stop bankrolling the Myanmar military.

The people of Myanmar have mobilised against dictatorship through a national campaign of civil disobedience and boycotts against military-owned products. Even MOGE’s own staff are publicly protesting. We must back up the peoples of Myanmar in their struggle against the Myanmar military dictators.

Pressure on Chevron works. In 2017, after pressure from activist investors led by Azzad Asset Management, Chevron told the BBC that it would work for “a business environment that respects human rights”. But we need now to pressure Chevron until it stops bankrolling the Myanmar military.