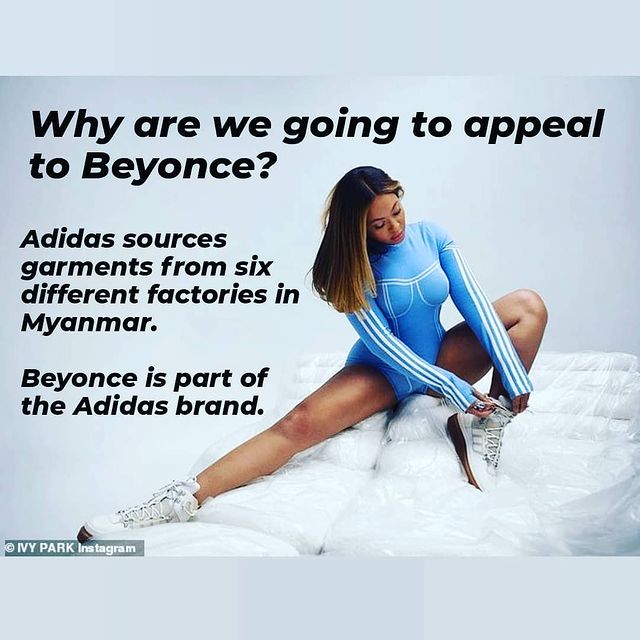 Ask Beyonce to speak out in support of our sisters and brothers in Myanmar’s garment industry.

On February 1st, 2021, the Myanmar military executed a coup, illegally and violently overthrowing the elected civilian government and shattering the dreams of many across the country.

In response, citizens from all ethnicities and walks of life have joined together in the new Civil Disobedience Movement (CDM). At the forefront of the CDM resistance are the young, mostly female, garment workers. On March 8th, 2021, the women from Myanmar’s garment industry responded by leading strikes and protests, boldly decrying this theft of their freedom and their future.

Ma Moe Sandar Myint, Chairwoman of the Federation of General Workers of Myanmar (FGWM) has stated: “We are being shot in the streets during the day. Our homes are being raided at night. We have made the global apparel brands huge profits with our bare hands over the years, the very least they should do right now is ensure we are not fired simply for wishing not to live under a military dictatorship. Amidst such an undisputed human rights travesty, their silence thus far is appalling,”

But the apparel factory owners are intimidating and firing workers for going on strike and taking part in pro-democracy protests. Recently, a number of workers were shot and killed when they were lured back to their factory to collect their salaries. Major brands, like Adidas, whose garments are made in Myanmar factories, have been largely silent about the plight of their workers.

Beyonce has visited Myanmar and experienced the hospitality of its people. More importantly, Beyonce has a long-time business collaboration with Adidas, which makes and co-brands her Ivy Park fashion line of activewear. If Beyonce were to speak out publicly in support of Myanmar’s garment workers and the Civil Disobedience Movement, Adidas would be under a lot of pressure to back up its apparel workers too.

Today, Myanmar’s peoples echo the song of the oppressed throughout history. They call out with one voice, “We must resist! We have nothing to lose but our chains.”

Please sign our petition urging Beyonce to support the workers on the front line of the struggle for democracy in Myanmar.For More Information:
Speak Up For Myanmar – check out the website for a summary of this campaign and many images and resources that you can share with your friends
“Primark supplier accused of locking workers in factory in Myanmar protests,” The Guardian (UK), 13 March 2021
“At least six killed after factory owner calls in military in Hlaing Tharyar,” Myanmar Now, 17 March 2021
“Myanmar’s Defiant Garment Workers Demand That Fashion Pay Attention,” New York Times, 12 March 2021
“Apparel Brands Must Act to End Intimidation of Workers Engaged in the Civil Disobedience Movement in Myanmar,” International Campaign for the Rohingya, 11 March 2021
“Open Letter to Apparel Brands Sourcing From Myanmar: Ensure Protection of Worker Rights,” 9 March 2021
“Garment factories supplying EU market accused of targeting union leaders,” Frontier Myanmar, 7 March 2021
“Workers in Myanmar Are Launching General Strikes to Resist the Military Coup,” Michael Haack and Nadi Hlaing, Jacobin, 9 March 2021