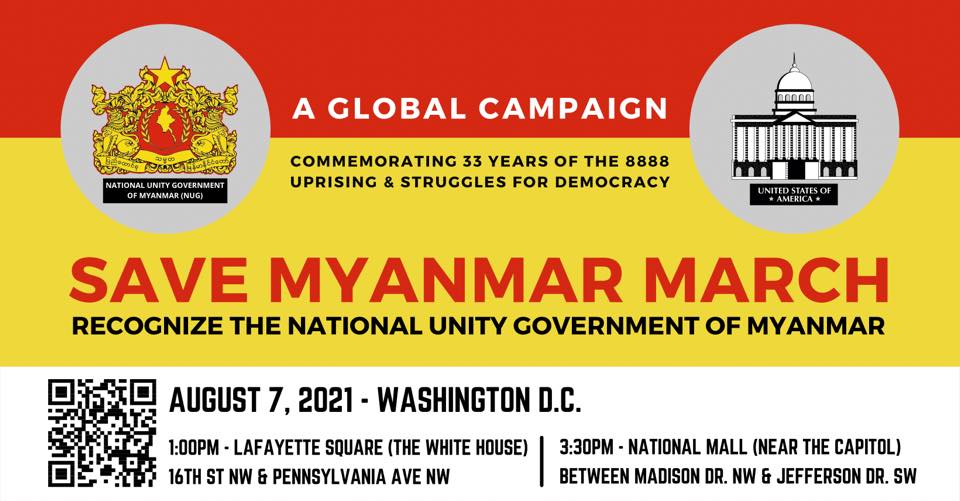 Just hours after the military coup in Myanmar, we stepped up and organized petitions to President Biden. Next week, we are helping to organize lobby days in Washington, DC, for the introduction of the new Burma Bills. We never let up in supporting Myanmar’s Civil Disobedience Movement (CDM) in its struggle against the military junta.

Please give to build our campaigns to support Myanmar’s Civil Disobedience Movement.
With Myanmar at this crossroads, the Meah Family Foundation and the Louis Kraar Memorial Fund have pledged $20,000 to scale up our successful campaigns. They are challenging you to match or exceed their $20,000 gift. You’ve already stepped up with gifts of over $17,000. Would you help us raise the $3,000 we need to hit our match of $20,000 by the end of this month?

We are both humbled and inspired by how you have already built our movement. Together, we’ve effectively lobbied our governments to sanction Myanmar’s military and its business empire. We’ve also put effective pressure on companies – such as Western Union, online jeweler Angara, and beer giant Kirin – to stop their flow of money to Burma’s army. Together, we have made it crystal clear: there can be no “business as usual” with Myanmar’s military dictators.

Now, more than ever, we must dig deep to support our work to hold the Myanmar military to account.

Your gift will build our grassroots movement to end the atrocities and the repression of the Burmese army. Your support will fund our campaigns to:

It's bad enough that the Myanmar junta is piling up absurd charges against Aung San Suu Kyi (importing walkie-talkies, breaking Covid rules). Now her "lawyer says he has been barred from speaking about her case." https://www.theguardian.com/world/2021/oct/15/aung-san-suu-kyis-lawyer-says-he-has-been-barred-from-speaking-about-her-case?CMP=Share_iOSApp_Other

Campaign for a New Myanmar@ANewMyanmar·
15 Oct

Campaign for a New Myanmar@ANewMyanmar·
15 Oct

The People's Soldiers, a group of former Tatmadaw recruits who have defected to support anti-coup efforts, say #MAH & his Generals committed high-treason and have called for him to step-down immediately. The coup has failed. The junta has no legitimacy.
http://ow.ly/fQCW50GrN3o